So, this last week my best friend and I did a whirlwind tour of some of the theme parks around LA, including a trip to Universal Studios Hollywood. There's more than enough to fill several posts, but I thought I'd start with just a quick review of the two rides that are part of the new park addition, the Wizarding World of Harry Potter.

Most of the point of this park, which is done up like Hogsmeade, is the ambiance and the shopping. Plus, Universal Hollywood isn't really as much of a theme park with a ton of rides and things anyway. So there are only two rides to speak of, and we eventually did them both.

As you might recall from my coaster review from Busch Gardens, I'm not actually a fan of roller coasters or certain types of thrill rides. So I actually hesitated to ride either of these at first.

As I mentioned in the article on Busch Gardens, I do a lot of research before I go to parks because it helps my coaster anxiety. But with these two rides, I didn't do that much because I repeatedly saw the same thing: the lines at Harry Potter are absurdly long. All the time. Just super long. At any other park, that would mean I would just say to utilize whatever their version of a fast pass system is. Everywhere else I've been recently has some kind of thing where you can get a ticket to come back during a certain time frame and bypass the longer line, so you spend that hour doing something fun instead of standing around.

Universal doesn't do that. You can pay almost double the price of your ticket to get a one-time front of the line pass for each ride, or you wait in line. That's it. Which is unfortunate, because we didn't plan on riding half the rides in the park, and didn't have that kind of money. So we both assumed that the Harry Potter rides were out.

Turns out we were wrong. I don't know what kind of luck we had, maybe it was because it was January and kind of cold, because it was raining off and on for a few days at that point, or because we were there at a different time of day than other people were, but it turned out there wasn't a problem with lines. When we got to Hogsmeade, the line for Harry Potter and the Forbidden Journey was listed at 80 minutes. Hard pass.

But Flight of the Hippogriff was actually only 15 minutes at that point. I passed at first because the butterbeer had made me sick to my stomach. Cyn rode anyway, and said she ended up sitting next to an eight year old who tried to make sure she (my friend, who has been on many, many coasters in her life) wasn't too scared. It was adorable.

But then later after we'd been wandering a bit I opened the park's app and saw that the line for Harry Potter and the Forbidden Journey was under 20 minutes. I couldn't remember details about the ride, because I hadn't researched much, but I decided to go for it. This was both a good and bad decision for a couple reasons.

First, for the bad thing that really isn't a bad thing, just that I didn't do what I should have. See, the long lines for the ride aren't as much of a problem as they seem because the queue for the ride IS an attraction in and of itself. The line winds around for a tour through Hogwarts itself. We joked that the wait for the ride was 20 minutes because it took that long to walk through it. And that's not really a joke, this video of the full queue is 20 minutes long:

The castle is amazing, and we didn't really catch most of it because we were trying to get to the ride before the crowds came. Which was fine, but we totally should have turned around and gone back through the queue just to stop and see it all. It was beautiful. 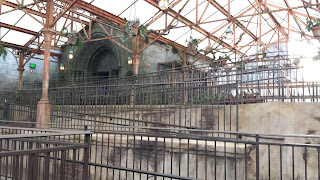 I don't have pictures inside the castle proper because I only had my cell phone and the light is too low for it to have worked well, but you can see it in the video.

What I can't embed a video of is the ride itself. I've watched two or three and none of them are worth it, they don't capture anything about the experience. First, because it's a very dark ride mostly but also because the type of car/restraints mean that a fixed camera POV isn't going to work at all, you'll miss most of what you see from looking around and being actually present on the ride.

Listen, I had no idea what I was getting into because I hadn't done my research. I was expecting a basic 3-D simulator ride, where you sit in a seat and it bounces around while a video plays in front of you. That is not at all what this ride is. You're in a car that has four seats, and you walk on a moving walkway to get into it. Then it's picked up at the end of the walkway, and your feet are dangling. At this point I'd love to know more about the mechanics, because it must be fascinating. But the ride becomes a mix of a simulator ride, where you're moving along with a 3-D video in front of you, and a traditional thrill ride. There are parts where you're being "tossed" around through the Forbidden Forest and a cave full of dementors, all using practical effects. There were some parts where I got a little antsy, but I would ride it again in a heartbeat. It was a ton of fun, and while I really hate waiting in lines, it'd be worth a longer wait for sure.

After we got done with that, I decided I'd be fine with riding the Flight of the Hippogriff after all. I mean, I couldn't let an eight year old be braver than me, right? Besides, the ride was less than five minutes.

The queue for this one is less built up, though you do get to walk past Hagrid's hut. Word of warning: the cars are tiny. I felt very cramped and uncomfortable, just because there was no foot room for me, and I'm super short. I can't imagine riding it if you're six foot tall.

We rode at sunset, and it was absolutely beautiful, you really get to see the park on this ride. It's also my kind of coaster, if it was a launch coaster instead of a lift hill it would be perfect, though I guess then you wouldn't get the nice sunset.

The whole ride is super, super short. And it's not that fast either. Actually, I ended up finding it kind of relaxing almost? It was just really pretty, and I could have ridden it longer. I can see why reviews say it's not worth a long wait, it definitely wouldn't be worth waiting more than maybe ten minutes for as an adult, but it's a fantastic coaster for kids.

So those are the two Harry Potter rides, more about Hogsmeade next week!

Posted by Elizabeth at 5:28 PM