Last weekend, my best friend and I traveled down to Williamsburg to spend some time at Busch Gardens for their Howl-O-Scream event. I'd been meaning to go for years, since the park is actually pretty close to us, but I haven't managed.

What's especially sad is that for only being a few hours drive away, I haven't actually been to this park since I was a kid. As in, I was too short to ride most of the rides and was extremely disappointed not to be able to join my brother on the Big Bad Wolf or the Loch Ness Monster. I didn't even get to ride the log flume because it was closed for repairs. Basically my big memories of Busch Gardens before last weekend was that we got caught in a huge thunderstorm, and that I couldn't do anything. Though I do also remember riding the train and the skyride.

Anyway, so I had two main goals for this trip: make up for lost time and hit every haunted house. I'll review the haunted houses and Howl-A-Scream in another post, but first, I want to go through the rides.

See, one thing changed in the 30-ish years since I'd last been to the park: I'm now afraid of roller coasters. Well, I would say less afraid and more anxious. Once I was tall enough to ride and tried out a few I realized that there were just significant aspects I just didn't like. No, not the upside down parts or even the big drops. I hate the lift hills and the slow parts.

Luckily I went with someone who is both likes coasters and doesn't mind people who don't. So there was no pressure to ride something I didn't want to, and all the support I needed to try anyway.

The first night, we mostly did Howl-O-Scream stuff but we did notice that there was a very short line on Verbolten when we went by, probably because there had just been another storm and people weren't back out yet. 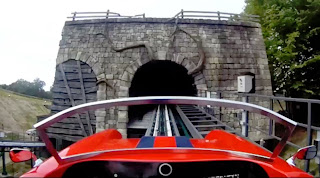 Verbolten was on my list of things to try for two reasons: first, because it replaced the Big Bad Wolf and since I couldn't ride that one I'd have to ride it's replacement. Second, because it's a launched coaster and has no lift hill. It was actually another launched coaster that made me realize what my issues were with the lift hills, because I rode that one and loved it.

Now my first ride on Verbolten was actually at night, so I wasn't entirely thrilled with it. Honestly, I don't know that riding coasters at night really has much appeal to me. Though with Verbolten you can see in the picture that there's a significant amount of the ride that's actually inside a tunnel, so it's dark anyway. But the light show makes it more fun.

The first ride on this was interesting to me because first, it was dark so I didn't see the last drop really at all and missed out on the part that goes towards the water (a very similar drop to the Big Bad Wolf) and second because I was just on the cusp of thinking that I wasn't actually enjoying it when the ride ended. It was in fact the perfect length for me, just enough fun stuff but not too much. So I told my best friend we'd have to ride it again the next day during daylight. 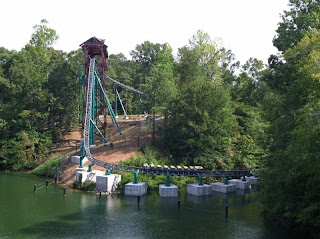 Which we did, and I really liked it the second time around. Being able to see the outdoor track made it a lot better for me, and it made me appreciate that last drop so much more. Though I do think that for Howl-O-Scream they should put some spooky, eerie lighting just under the water at the bottom of the drop to make it look creepier. They should do that for any of the coasters that go near water, just some green underglow.

But anyway, my point is that Verbolten is a fantastic coaster, and it's especially good for people like me who may have some issues with the "thrill" rides but still want to do something fun. I'm pretty sure it doesn't go upside down (in the tunnel I have no idea what the track did). The only reason we didn't ride it again was that the line was so long. And even though I'd watched the ride video above before I went, there were still some surprises, which was great. I wish we'd seen a different theme, there are three random themes for the lights in the tunnel but we saw the Wolf theme twice.

The second day we were there, the first thing we did was head for the Loch Ness Monster. 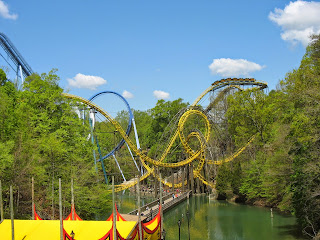 Now, before I go to an amusement park I spend a fair amount of time researching the rides. So I knew before I went that of the five coasters at the park, the Loch Ness Monster had one of the smaller lift hills, and since I had wanted to ride when I was a kid, I kind of had to do it, even though it kind of scared me.

The Loch Ness Monster is actually over 30 years old, and the first lift hill is only 130' which is a good 40' shorter than the tallest one I've ridden. But it's claim to fame is being not just the first coaster to have interlocking loops, but currently it's also the only one still running with that feature. 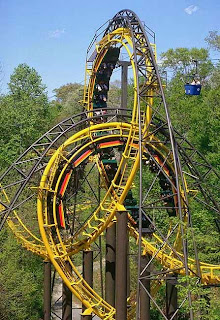 Now as I said, I have no problem with loops so the interlocking loops actually looked like a lot of fun to me. The funny thing about this one is that at the top of the anxiety-inducing lift hill is just this casual little turn to the side instead of a big drop. It was actually a bit anti-climactic. There is a second lift hill, but it's really minor.

One thing I didn't expect was how much of the ride was in the tunnel that's midway through the trip. I saw the tunnel on the map, and I guess I hadn't watched a video because I thought it just went straight through. But instead it loops around inside a couple times in complete darkness, which was really disorienting but kind of fun. But since I didn't expect it, it felt a bit long and I was wondering if we were ever leaving the tunnel.

All in all, the two coasters that we rode were actually quite fun, and as much as I don't really plan to ride the Loch Ness Monster frequently, I'd go on it again. I'd ride Verbolten a lot more times.

For those who might be interested, the other three coasters in the park were struck off my list because of the height of their lift hills. Apollo's Chariot is about the same as a coaster I rode that I really didn't like too much, Alpengeist is much taller and a suspended coaster which I've never done before. And I'd ruled out Griffon because of the 205' lift hill but then I actually saw the ride in action and how it pauses at the top before a 90 degree drop and no thank you. But seriously, if you like coasters, Griffon is probably pretty amazing. Next time I go to the park I might try Apollo's Chariot.
Posted by Elizabeth at 4:10 PM