I know, it's been an age. What can I say? I released the movie I've been working on for the last three years and life has been INSANE the last few months. But I'm trying to get back into the swing of things. I'm going to reassess my schedule though, try to do something I can keep to. But who cares about that, you're here for a review!

I've not gotten a Julep mystery box in a long while, because my experience with the last one I ordered was a big hassle because of awful shipping. Which was what prompted me to actually write their customer service to complain. Since then they've added a different system for tracking boxes. Plus, their Memorial Day mystery boxes were kind of fun. There were ten of them, at different price points, and they each told you one or two items in the box and a "clue" for the contents. I liked the idea. 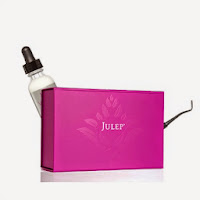 So I picked up box #4, which said it came with the Vanish cuticle remover and a cuticle pusher and the clue "a healthy high five." Plus a promise of $102 worth of items for only $25.

Now, if you buy a bottle of Vanish and the cuticle pusher for normal Maven prices, that costs $25.60, and I'd been considering it for a while so it seemed worth it, even if like most mystery boxes the $102 value was very inflated and went with the "value" of everything being absolutely full price, when most of it is on sale or at least available for less at a Maven discount. I also assumed that the "clues" were telling you something ELSE that was in the box, not that the clue was a reference to what you already knew was there. So I thought that since they were saying "a healthy high five" and you already knew there was Vanish and a cuticle pusher, then there would be maybe some Rock Star hand cream, or the hand scrub in there.

I really wish this review was going to end up being a glowing and positive one. But as you can probably already guess from all the times I've mentioned my assumptions, you know where this will end up. To start with, their shipping is still abysmal. Their shiny new tracking system is useless, and only solves one of the problems I had with their shipping on previous boxes, and doesn't really do that. Before, there was no estimated delivery date available, and that annoyed me because there was no way to know if a box had been lost in the mail or was just taking forever. Now you get an ETA, but it's a time span of THREE DAYS. I can predict a better time frame than that for most deliveries just by guessing based on hunches and educated guesses from years of ordering things. A three day time frame for an estimated delivery is useless.

On top of that, they don't even actually meet that delivery estimate. I almost never have gotten DHL shipped boxes within that three day window since they've started this new tracking, it's usually within those three days that it switches to being "transferred to the USPS" where just like always, it sits for 2-3 days with no updates or information. Which is a major part of the problem, Julep. DHL is a terrible shipping company who does a terrible job and your customers are tired of it, you just need to take a glance at your social media comments to see it.

Then, icing on the cake, I ordered this around the same time that my monthly Maven box shipped. I got my Maven box the day before I got the shipping notice that it was going out and that the tracking info was available. And I've seen several other Mavens say the same thing. Which makes me think that the DHL tracking info isn't emailed out until a few days after it ships, which makes it even slower and more ridiculous than it originally appears. Is that being done on purpose so you don't know how long it actually takes? I don't know, I just know that Julep needs to get it together on their shipping issues.

And on top of that, after I wait ages for my box, and after it arrives a day after the three day estimated delivery window was up, it wasn't even worth it:

The "clue" turned out to be nothing, and looking at blogs where they revealed the contents of all the boxes, it seems like all of the clues were really just talking about the product that you already knew was coming in the box. Honestly, there seemed like little to no "theme" at all to most of them.

Now, I still got the two products I wanted, obviously, because they were listed as being included. But instead of other hand products the box contained five more polishes, which would be kind of great I guess, if they were polishes I wanted.

To the individual products:
Vanish Cuticle Softener and Remover: I've only used this once, and I can say that it definitely softened my cuticles more than other things I've tried. I still don't exactly see the point of messing around too much with my cuticles but I wanted something for when they get a bit out of control. This definitely does the job and does it exactly how it says it will. You follow the directions and you get the results they say you will. $18/$14.40 Maven

Cuticle Pusher: So, this is in fact a very nice cuticle pusher, and I'd been wanting a good metal one because the orange sticks I have never seemed all that great. It's very well made and well balanced, I'm just not entirely sure it's as good as the price tag suggests. $14/$11.20 Maven

Barbara: This is one polish I'm pretty happy with, it's a full coverage purple glitter (Julep calls it a "multidimensional magenta") and I actually have thought about getting it before. Definitely a plus, and I'm happy to have gotten it, especially because it's currently out of stock. $14/$11.20 Maven

Tania: This is another glitter, not as full coverage, and is called a "mermaid teal" by Julep. I thought about buying this one before too, when it was a featured add-on one month (I think), but it was out of stock and I talked myself out of it. So again, this one was a good thing to get. $14/$11.20 Maven

Ava: This is where this box starts to go south for me. Not only is this a duplicate for a color I've already gotten in another box, but it's one I'd already decided to sell instead of using. I'd only just gotten rid of the previous bottle and now I have another. The color is a "ballet slipper pink" and I already have something similar and don't do pink nails anyway. This isn't a bad color, actually it seems really pretty if that's your thing. But it's not mine.$14/$11.20 Maven

Lois: This one is a "dusty rose frost" that goes in the same category as Ava, I'd actually just managed to sell another bottle of this I'd decided not to use because I don't need more pink. And also because Julep's frost polishes tend to be a bit streaky and fussy to apply (probably not a great sales pitch for my eBay listing but the truth). If it's a color I love then it's worth the extra effort to get a good, clean look from it. But that's not worth it for pink, for me. $14/$11.20 Maven

Fiore: This one actually really bugged me, because I know that this color has been on sale a LOT in the last few months, and at one point was only $1 as an add-on. It's been really easy to get, and easy to get cheaply. To the point where again, I already had one bottle of it and sold it because I realized I had a nearly identical color already. I've already sold this one too. $14/$11.20 Maven

Now, Julep apparently has wised up a bit and none of these polishes were currently on sale, which is what almost always tanks the estimated value of the box when people add them up after they get them. Smart move. So everything being currently full price, the advertised value actually holds up. Well, except for the fact that if you're a Maven everything is cheaper, so it's actually only worth $81.60 rather than $102. But that's a nearly 70% savings instead of 75%, so really, only a slight difference. And in the end, well worth it, financially. There is no denying it was a good bargain if you just compare money spent to value of goods received.

But once you put together the terrible shipping, the fact that the "theme" didn't exist, and the fact that only two of the five polishes were fun or interesting, then I'm not really thrilled. Since this is two disappointing experiences in a row with mystery boxes, then I think it's time for me to hold off on getting any more for a long while.

I realize that this less than glowing review isn't going to help me get any Julep referral points, but I've got to be honest, I'm just not a very happy customer of theirs right now. I'm planning to get next month's box, but probably no more mystery boxes, and after the next Maven box I'll probably be skipping for the foreseeable future unless they overhaul a few things. Starting with their shipping.

Edited to add: in Julep's recent Red Marker Sale (which is a customer service fiasco if you ask me) they've put at least two of these polishes up on sale for $2. So soon after them coming in my mystery box as such a "great deal." Yup, that's the perfect way to convince me that this box was full of polishes they just wanted to get rid of and not a great deal. Technically, I have no problem with that idea, that a mystery box or a grab bag is a bunch of things the company couldn't sell at normal stock prices and they'd like to clear out. That's a pretty normal and expected marketing strategy. It's the "worth" calculation that's so sketchy about this and makes me so grumpy. Don't tell me it's worth $14 if you can't sell it at $14 and you have to mark it down to $2 to get rid of it.
Posted by Elizabeth at 11:58 AM No comments: