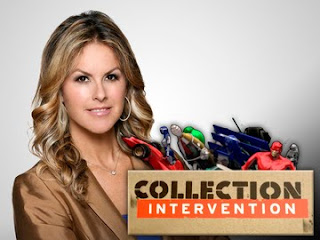 One of my not-so-secret indulgences used to be shows about getting rid of stuff. It's a weird genre of "reality" tv, or at least "unscripted," I'm not sure if it qualifies as reality. A lot of them end up being makeover shows in the end, like Clean House, which used to be one of my favorites.

It ended up being a good thing for me, because watching those shows so much started helping me clear up a lot of the brain fog involved in keeping too much stuff. There's a lot of sentimentality involved, plus I think everybody has some specific defense mechanisms involved that start us down the road to just being cluttered, and sometimes straight on down the line to hoarding.

The problem I had though, was that I started seeing a distinct break in the types of people involved in the shows. The "hoarders" had some pretty distinct problems, sure. But at the same time, they saw a value in some things that was irreplaceable and that's not always a bad thing. In fact, a certain amount of it is probably healthy. For them, the clutter wasn't all useless. Sometimes things other people wouldn't care about were things they still used. Sometimes an item was all they had left to remind them of a loved one who was gone.

The problem is the "authorities" on most of these types of shows have a zero tolerance policy regarding "things." They like to trot out the "so and so lives on in your memory and your heart, even if you don't have this thing to remind you" line. But you know what? That isn't always good enough, and it doesn't always matter. I don't care that I will never have decor that goes with the crocheted crafts that I have that my great grandmother made, ever time I see them they make me smile and I will always keep them, because it's not the "when I want to think of Granny Memaw I need these to remind me" kind of thing. It's that unexpected moment when you see something physical, that actual tactile memory. It means something, and pretending otherwise is stupid.

One of the other kickers for me was also how much these "authorities" tend to insult people who have things they considered childish. Video game systems were frequently forced out into yard sales because "it's time to grow up" and because "you're an adult now." Action figures, collectible dolls, all kinds of collections were toss out like they were nothing because the people in charge thought they were silly and refused to acknowledge that the owners might have another viewpoint that is valid.

This long rant is my way of explaining why I stopped watching those kinds of shows and why I actually avoided Collection Intervention for almost it's entire season. I really didn't want to see a show that was completely focused on telling geeks that they weren't mature enough if they had a bunch of action figures. I didn't need to see people telling someone to throw out their original Super Nintendo one more time. And yes, for the record, I do have a Super Nintendo. It's sitting in my living room, hooked up to my tv. Because I'm a gamer and I find happiness from playing games and I don't care what stupid "grownups" think about it.

One night, after another show I was watching finished, I didn't change the channel and got sucked into an episode of Collection Intervention.

It was kind of amazing.

The host, Elyse Luray, does not have a problem with collections. In fact, her mission on the show is actually to help these geeks and nerds to be BETTER collectors. She convinces them to properly store and display their items so that they will last longer, to inventory them properly in case of a fire or other disaster, and if they're valuable enough she talks about getting insurance. She tries to help them understand the true value of their collectible pieces, which is something that most collectors have an issue with.

Listen, we all wish that the random limited edition action figure we got at a convention is actually worth a lot and is in high demand because it's "hard to find." But at the end of the day, your stuff is only worth what somebody is willing to pay for it, and if you're not willing to sell it then technically it's not really worth anything except what joy and satisfaction you get from owning it. I collect E.T. memorabilia so really, I get how awesome it is to have something that really, nobody else wants.

At the end of the episode, I actually had useful information and some tips for how to deal with my own collections. I'd heard many times that something is only a collection if you're displaying it in a way it deserves, something I really believe. If you have it shoved in a box in a closet, then you should get it out and display it or let it go because it's not bringing you happiness. Luray takes that point of view and expands on it, helping people understand that it's really okay to own something just because you think it's cool, but that you should really OWN it. Take care of it, value it, and be proud of it.

I'm hoping there will be a second season, because I will tune in every week for it.
Posted by Elizabeth at 3:48 PM