I'm a little behind on posting, that's because in the world of my big career, there's a lot going on. I'll probably post about that when things are more official, but yeah, been super busy!

Anyway, it's the first of the month so time to post about my fabulous November Birchbox!

I was thrilled with this month's box, everything in it was something I wanted to try!

First up was the Eyeko Black Magic Mascara, and this was perfect timing because I was just thinking I wanted to try out some mascara on my quest to learn how to do makeup (twenty years later than the rest of my peers). I absolutely LOVE this mascara, the packaging is adorable and reminds me of oil paint tubes, and since I used to paint that's a great plus. It goes on easily, and what I love is that it's not trying so hard to be BIG BOLD LASHES and so it's actually right for my face and my lashes, which don't need a ton of extra bells and whistles and just need to be a bit more defined and well, nice looking. I love it, it's become a regular part of my routine already.

Then I tried the Folle de Joie eau de parfume. Now, one thing I have to specify: I am not a perfume person. I don't wear it regularly because I can be overly sensitive to the ingredients in it (not sure if it's the alcohol or what) and often I can't smell what they're saying it's supposed to smell like, and it gives me a headache. This perfume is absolutely 100% the cure for that problem. It smelled heavenly and was very subtle and lovely. I really, really wish the full size wasn't so expensive, I would have bought it already.

I've become a huge fan of body butter lately, so the AYRES Body Butter in Midnight Tango was a nice addition to my box. It smells fabulous, which I didn't expect. Normally if a scent says "midnight" it's not my style but this is a blend of orange blossom and vanilla, which was really wonderful. It's also a great consistency and just a fabulous body butter in general. Highly reccomend.

There were also two products by WEI, the Golden Root Purifying Mud Mask and the Pomegranate Buffing Beads. I had been wanting to try the mud mask for a while because of the great video they did about it:

The packaging is pretty cute, and I admit the idea of brushing on the mask makes me happy. The sample didn't come with a brush, so I grabbed a paintbrush I already had to use it. The good thing is, these little pods hold way more than one use of the product. I probably could have gotten three out of it.

The reason I say probably is that I only really used it once. The first time, the mask was great and I really liked it. My skin was noticeably softer afterwards. The second time, some ingredient in the mask set off a skin issue that I have (it's probably an allergy but I can't isolate the ingredient that causes it) and I had to wash it off almost immediately. Which meant that I couldn't really use it again. Now, I only mention this because it means I couldn't use the product enough to give it a fair evaluation, not because I'm unhappy about it. My weird allergy is my problem.

The buffing beads I wasn't really a fan of the idea to begin with, because I don't need to juggle a whole bunch of different packets and bottles and mixing stuff while I'm in the shower. I'm a fan of simplified skin care, and also organic ingredients and I've heard these beads are pretty much just plastic and that's not on my list of okay stuff. So I'll stick with the exfoliater I have now, which does a fabulous job and doesn't really need any help anyway.

The last thing in my box was Fatty Sundays Gourmet Chocolate Covered Pretzels in Toffee Crunch. I only have one bad thing to say about this sample: I wanted to go buy thirty boxes of this stuff after I ate it. I love toffee, and the brilliance of the Fatty Sundays covered pretzels is that the toffee coverage is at the right ratio. The toffee and chocolate pretzels I've seen since have this little barely there smattering of a few toffee pieces. No, this is coated in amazing, delicious toffee. It was so, so, so good. 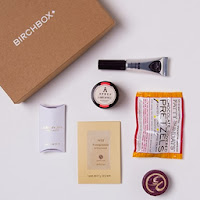 So that's my November box! Pretty much all hits really, and at least one item that is a new staple for my makeup box. What'd you get in your box?

And if you don't get a box sign up now! It's definitely worth it, check out my Birchbox tag for more box reviews if you're curious.
Posted by Elizabeth at 5:31 PM