I joined Julep on a whim a few months ago and I've been very pleased with their products so far, and their ability to convince me to buy more because of how many sales and specials they have. I've slowed down a lot recently but it's time for me to start reviewing all my purchases! If you want to see how my various manicures look, you should follow me on Instagram, I always post a picture there.

Anyway, I had resisted the mystery boxes that Julep does for a while, but then they came out with the Diamond Mystery box, which automatically came with two gorgeous glittery top coats. I am a complete sucker for glittery top coats, they're my primary nail polish weakness (along with anything blue and/or metallic).

The add promised that the mystery box would contain at least $120 worth of items, and the add on would be worth $48. The box itself was only $24.99 and then the add-on was an extra $9.99 so I decided it was worth it and went for it. Now, one thing that's important to note is that Julep always calculates that "value" at the list price of each item. If you're a Maven you already get a discount. 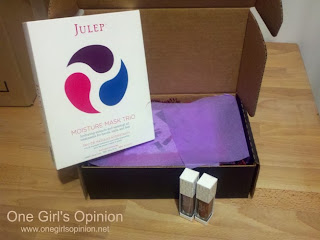 The mystery add-on was the Moisture Mask Trio ($20 list/$16 Maven) and then Adele and Lois were the polishes. Julep always says their polishes are worth $14, but I've never paid that for a single one. Both of these colors have been on sale since the box came in, but they're currently both full price at $11.20 for Mavens. That puts the add-on value at $38.40 for Mavens, though like I said, both of those polishes have been much cheaper since I purchased this box.

Moisture Mask Trio: Retail $20, $16 for Mavens. I've only tried the nail and foot masks so far. The nail masks are interesting, and they're not lying when they say you can still use a touch screen through them, which surprised me. I wasn't going to bother but I got a phone call the second I finished putting them on, so I'm glad they worked! The foot masks were a little awkward, but they stayed on and everything did what it said it would. I didn't notice any particularly amazing difference in my skin after each one, but it was a nice way to relax and pamper myself for a little while.

Adele and Lois: $14 list/currently $11.30 for Mavens. Both of these have been on sale at least once since I got this box, and were on sale when the box arrived as well. Adele is a "golden reflective top coat" and it's gorgeous. I've been wanting it for a while, it goes wonderfully over other polishes and I love it, I'm very happy that I got it in my box. Lois is a "dusty rose frost" and honestly it's not my style and I've developed such a huge collection already, so I've listed it on eBay instead of keeping it. It does look quite beautiful, I just usually go for blues or reds rather than pinks. 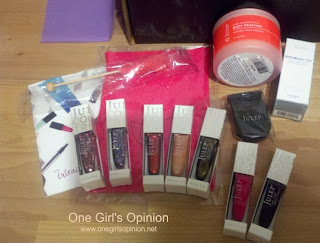 Along with the seven polishes, which I'll get to in a second, there was also:

Pink Grapefruit Body Frosting: List price is $18, but it was on sale already for $9.99. This body frosting smells wonderful, and it's a really interesting and fabulous texture. It really is whipped and airy like frosting, and I really liked it. Since winter started, I've been switching my regular body lotion up with body butter and this is similar. It rubs in quickly, it feels nice, and it smells good. It might have been discontinued already though, I had a very hard time finding the website for it.

A pink scrub mitt: Retail $5 but on sale for $2.99. I admit, I haven't used this yet. But I've used similar products in the past and they're quite nice. I'm sure it's good.

Doublestep Foot Treatment and Friction Stick: Retail $22, $17.60 Maven. I had been thinking about buying this before, but I read a few negative reviews on the website and hesitated. I'm kind of glad I did, because I got one in this box. And also, because the reviews were right and I wouldn't want to have two. Honesty, there's no way this is worth even the $17.60. As soon as you apply any pressure (you know, like by actually using it like it's meant to be used) it rolls right back into the container, so you have to hold the dial at the bottom to actually use it. It doesn't go on particularly smoothly, and I haven't noticed it really doing much to prevent blisters though I admit I don't wear shoes that regularly cause blisters. I also haven't noticed it being particularly moisturizing or nourishing. There are much cheaper products that do the same thing, this is the first major disappointment I've gotten from Julep.

Travel Eyelash Curler: You actually can't buy this product on it's own, but I calculated the value based on the set linked here minus the cost of the mascara, which basically made it worth $6 list or $2 on sale. I've tried to use this a couple times since I got it, and honestly I have no idea if it's really doing anything. I've always found eyelash curlers a little silly, I'm just not that kind of girl I guess. I suppose this one is good for what it is, I wouldn't know the difference.

and pink rock candy, which looks delicious but I haven't tried it yet. 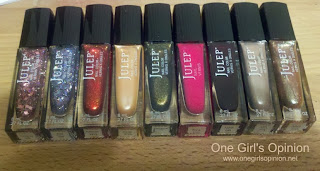 Now for the best part, the polishes!

First, the ones that were sold as "exclusive," Geo and Antonia. Now, I took "exclusive" to mean you could only get them in this box, but Antonia is now on sale at their website. But that's okay because Geo was my favorite anyway. They're both holographic diamond glitter top coats, Geo is blue and Antonia is pink. I absolutely love them, though I haven't used them yet. I'm giving them both a full value of $14 list or $11.20 Maven.

My other polishes:
Candace: A "golden chocolate microglitter" that looks so much fun in person. I wouldn't really describe it as chocolate, more of just a really dirty bronze, but it's still very pretty.

Eva: a "raspberry creme," which made me happy because I've been craving more berry reds in general and really wanted this one. I haven't really used it yet though.

Karen: a "peach bellini frost" and really pictures don't completely do it justice. I don't have a ton of colors like this, so I like it for the variety and that it's a bit more subtle and "classic" than most of my colors, while still being a bit fun.

Karmen: a "golden crimson microglitter" and this one is just really beautiful. I have so many slightly different shades of red, but this one was so wonderful I actually got rid of a similar one because I knew I would always prefer this one instead.

Lucy: a "modern, dark burgundy creme." I have no idea what makes burgundy modern, but sure. I actually have an older polish from a different brand that's just called "red black red" that is very similar to this color, and I never do anything this dark as a base color, only as accents, so I decided to keep my half finished bottle and sell this one on eBay.

All of these colors are currently $14 regular price or $11.20 Maven pricing on the website, except Lucy which is $7.99 on sale.

Overall value
Now, when I actually got my box I did the math based on the prices listed on the website that day, and I came up with the box being worth $107.77 using Maven and sale pricing, because that's what the value would be to ME, since I'm a Maven. Obviously, this is kind of a far cry from $120+. Going by list price plus sale prices (because non-mavens can get the sale price) then you come out around $140. Now, I knew this would be the case going in, and honestly when you only pay $25 for something worth $100, then you're still getting 75% off.

So the Diamond Mystery box was absolutely worth buying for me. I got no duplicates, I got several polishes off my wishlist, and I got a few items I had wanted too (even if one of them turned out not to be that great). I do think that the boxes come off a bit of "let's get rid of a few things" because so much of it was on sale at the time that I got it, but that's okay because it's still nice stuff.

However, then we come to the glaring problem with Julep that I've discovered:

Shipping
Okay, so you get what you pay for and Julep does free shipping on most of their items, or if you're a Maven. Maven boxes ship out USPS, and they're always very quick to arrive.

Everything else ships out DHL. Which means it slowly meanders it's way across the U.S. before the tracking number states that it sits in a shipping facility for at least one week, usually two, before it's transferred to USPS and then delivered a day later. That's IF you're lucky enough to get a correct tracking number.

The number I got for this mystery box was not correct, and so I had no tracking information to work with. For all I knew, the box had never even actually been shipped because it always just said "invalid number." I waited for the tracking info to show up and it just never did. I finally got upset enough to write Julep an email, and they replied with a valid tracking number the day after my box arrived.

It's difficult to complain about something free, but I will say that the horrible tracking, the lengthy waits, and the general lack of any response from Julep on the matter on ANY of their social media sites (it's a constant refrain from customers everywhere and they never say anything in reply) means that I have greatly reduced my purchases from them.

That's great for me, it's saving me a lot of money. It's helped me resist nearly all of their Black Friday and Christmas sales, it means I've barely glanced at their holiday shop. I've been seriously coveting a particular holiday duo and it's been part of I think four sales since I added it to my wishlist and I've added it to my cart twice, each time to think about the shipping, which leads to thinking about what I've been spending, and then clicking cancel.

So while I'm saving money, Julep is losing money and sales, and my goodwill solely because of their shipping partner being so terrible. I'm sure they're able to offer free shipping because DHL makes them a great deal on cheap services, but they're cheap because they're AWFUL and that's not really the best way to run a business. And it's especially bad to be blatantly ignoring your customers when they complain about it.

Again, I'm still very happy with my box so there's a decent chance I'll purchase the next mystery box depending on the theme or what "exclusives" come with it. I'm just irritated that something I was so thrilled about getting eventually became a disappointment because it got tied up with terrible shipping and lack of tracking information.
Posted by Elizabeth at 4:08 PM