Face Off on SyFy 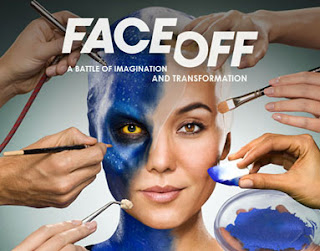 I pretend that I can say "I don't watch a lot of reality tv" but the truth is I do. It's just mostly I watch the shows where it's talent or art based, where there's an elimination after a challenge each week. Project Runway, Top Chef, that kind of thing.

Since I'm a filmmaker, and a sci-fi fan, the show Face Off seems tailor made for me. Because this format of reality show has been around so long, there are a lot of them that are getting to a point where they're just silly and almost nonsense. Mostly that's because of the contestants and the challenges. The contestants aren't artisans, they're reality wannabes, and the challenges aren't artistic they're just crazy. Look to the quickfire challenges on Top Chef. Last week they made everybody make a dish with a product placement item AND they all had to share one knife AND the dish had to be something that related to their heritage. Television Without Pity rightfully called that out as a bit overwrought.

Face Off doesn't really replicate exactly the experience of a professional makeup artist. There's not really a way to do that in a competition, that would be more of a documentary. But they do manage to come close, and while I don't really understand the judge's tastes half the time the show does show actual talented artists being talented.

Special effects makeup is no joke, and it's much harder than most people think it is. Last month I had to make a short film in a limited amount of time, and the story required the lead to have her knees skinned and bleeding. I had to do the effect myself and I'd say I probably spent more time on that than I did writing the script.

The show also doesn't spend a lot of time focusing on silly drama and setting up stupid moments for people to get angry at each other. Sometimes these moments happen, but if you've ever had a job you know working together is tough. The challenges themselves are usually pretty good, though there were a few this season that didn't really let the makeup artists shine, like the Dr. Seuss challenge. While it might seem like the dancing challenges, or the underwater stuff is a stretch the fact is the makeups that these people will be doing will have to go through a really difficult process to actually get on film.

The only thing I would change, if I was in charge, would be to actually have a few challenges where the makeups have to be actually shot in film lighting. Frequently something looks too cheesy to really work. Obviously the judges are experienced enough to understand the way something would look under proper film lighting. But the audience doesn't have that skill, and I think it would really help to see the difference. Also, because I love anything that helps a regular audience understand more about the skills it takes to make a good film. It's hard for people to really get lighting and gaffing but this would be cool.

In this last season, there was a bit of a controversy where they eliminated a contestant and then had a small competition to bring someone back. When that contestant started doing well, sometimes staying instead of beloved fan favorites, a lot of people started saying she was out and it was unfair for her to come back. I think that's pretty ridiculous, since bringing back an eliminated contestant is an old trope in the reality tv world. Almost every show I watch has done it, and Top Chef has made an entire extra show about it called Last Chance Kitchen. This season, the winner of that will actually be put back in the competition during the finals.

So at the end of the day, when that contestant was brought back, she earned her spot and she earned her wins after that as well. But I guess nothing makes people complain more when their favorites get eliminated, I know I still haven't forgiven Project Runway for a few things.

Long story short - this is a great show and even if you're only tangentially interested in how movies are made, make-up, or sci-fi you should absolutely be watching when it comes back in January.

Random side note, writing a review like this without giving away spoilers is way too hard.
Posted by Elizabeth at 2:48 PM