Avatar: The Legend of Korra 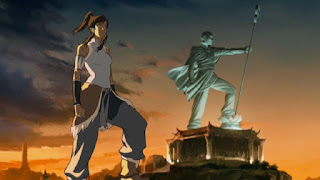 I resisted Avatar: The Last Airbender for a very long time. But eventually a friend of mine said "No, you have to watch it and it's streaming on Netflix" so I sat down and started watching it.

I loved it, almost immediately. It was a really well crafted show, but the primary draw was the characters (and the animation but mostly the characters). Aang, Katara, Sokka, Zuko, Toph...they were all so well developed. None of them were one dimensional. So often writers think "my character needs a flaw, let me give them a token flaw like they are clumsy and that'll do it!" but Airbender didn't fall into that at all.

The world was well realized, and fascinating. Nearly everything about it was the perfect example of what American television can be like if we'd let creators be creative.

When I read there was going to be a sequel, I was happy but worried. Few things are improved upon with a sequel. But the new Avatar was an amazing female character. She looked strong, and interesting. If they only did half the job they did on the female characters in Airbender, Korra would be better than most of the women on TV.

The quotes I read as it ramped up to the show's premiere warmed my heart. The creators said they didn't believe the idea that a woman can't be the lead on an action series. Demographics showed that little boys were loving the show and didn't care if Korra was a girl or what, she was cool. I was holding my breath: was somebody going to get it right?

There are a lot of attempts at "strong female characters" (a phrase I hate but can't seem to replace with anything). Sometimes there is success, like Col. Carter in Stargate SG-1 or Donna Noble in Doctor Who. But all too often the character either may as well be a guy because the narrative pays no attention to their gender (which I am not in favor of) or the entire plot of the show is actually the character's journey towards traditional gender roles.

The first episode of Korra was pretty cool. I was on the fence. The second was awesome, and the third even better. But if you're following the show, you know what happened in the fourth: the fandom exploded because there was ROMANCE.

There was plenty of romance and romantic feelings in the original show. But it wasn't really too over done, for the most part. There were a few gag-worthy moments but it was alright.

So far, there is little to make me believe Korra will manage to follow in those footsteps. Everything points to "stupid teenage love story stupidness." That's the technical term. I won't get into details, but I'm holding out hope that it's not going that direction and it's just a fandom overreaction.

When the show isn't doing stupid romantic subplots, the plot is actually fascinating. It's the kind of thing that is reflecting our real world through the fictional one and might make a few people think a little more about their lives. It's doing what all good television (especially fantasy stories) SHOULD do. And to their credit, I have no idea where they're going with this.

The animation is stunning, and most of the side characters are as wonderful as the original show (Tenzin is my hero, much like Iroh was). If they can keep themselves from the quagmire that is the promised love triangle then it'll be another entry in the top ten American cartoons of all time. But if it becomes another teenage love triangle where the girl gets distracted by the boy and gets all insecure because she's not girly enough, then it'll be one of the worst because it will have squandered so vast a potential.
Posted by Elizabeth at 11:40 PM