Oh no, I somehow managed to skip over my April and May boxes in the rush to talk about June apparently! Or I just got May and March confused like I frequently do. But here we are still in my Birchbox Throwback, let's talk about April 2014! 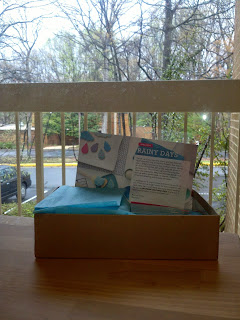 This month's box was themed for "rainy days" and it was so perfect because it arrived on rainy day. And I'm actually writing this review after a dreary rainy day, so obviously I'm back in the right mindset for it. The box itself was pretty good, had a couple great discoveries, some not so much, and as always lots of cute themed stuff. One thing Birchbox does well is their themeing, each month the box is very well put together. These ladies know what they're doing. 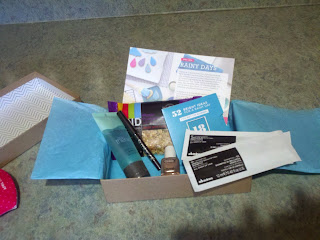 Gilchrist & Soames Spa Therapy Body Wash: Okay, this was the gold star for me in this box. I really loved this body wash, and it's high on the list of what I'm going to splurge on when I finally use up my cheaper body wash that I stocked up on a year ago and need to finish before I can spend money. I liked the smell, it worked really well, and it just felt great. The right amount of lather, just all around a really good product. I've since become a fan of this brand, even if their prices are sometimes a little high for me.

Sumita Color Contrast Eyeliner: I can't remember which color eyeliner I got in this box, except that it was kind of purple. This was my first experiment with colored eye liners, and while I thought it went on well and was easy to use, at the end of the day my major problem was it didn't matter how much eye makeup remover I used, or how hard I scrubbed, I still looked like I had a black eye whenever I tried to remove it. And I didn't have the best of luck with it staying put, so the dark purple just ended up making me look bruised. The eyeliner itself was probably great (except it was a bit smudgey), but the color didn't work for me.

KIND Healthy Grain Bars: The bar I got was pumpkin seeds with sea salt, which I expected to really not like. I'm not a big fan of pumpkin, and while I've liked quite a few sea salt flavored things lately, usually those words are followed by "caramel." I almost gave this bar away without trying it, but I did and I'm glad because it was actually pretty good. I learned that pumpkin seeds don't really taste like pumpkin, at least not what I'm used to. I have started buying more KIND products now that I had this and liked it, though they have been hit or miss since then.

Color Club Gala's Gems in Gold Struck: I got some Color Club polish in a previous box and if you read that review you'll see I was generally unimpressed with it. Since I wasn't sure if it was the fact that it was a metallic polish I was willing to give the company another try, but this polish was also a more metallic finish and so to be perfectly honest I ended up trading it without opening it so I could get a better swap out of it. The color also wasn't my style anyway.

Davines OI/Shampoo and Davines OI/Conditioner: Since I jumped the gun and went out of order, my previously reviewed June box was actually the second time I got a Davine's set of products. I don't mind getting multiples from the same company though, and these were different offerings from the brand than my other box. That said, I wasn't overly impressed, or even upset about them. They were fine, just completely fine. All the shampoo and conditioner samples I've gotten in my Birchboxes and there's still been only one I might think about getting once in a while instead of my current cheap brand. Shampoo has definitely not been a thing where I've been convinced to go higher end.

So, all in all, it was a pretty good box, no giant standouts but my introduction to a few good brands that I liked and want to try more from. Which is the entire point after all. You may have noticed one of my common themes is that I'm actually really cheap when it comes to things like beauty products, and Birchbox doesn't always go for stuff that's in my typical price range. So on the one hand, that's great because I get to try stuff I would never pick up on my own because of the price. Plus, with their points system if I find something I love I can splurge for it later. But the problem is, sometimes I feel like there's a long line of stuff that's just proving to me that my cheap ways are good because the expensive stuff isn't that much more impressive.

All that being said, I still adore Birchbox because it lets me have that trial and error to figure that out through actually using products and not just guessing that something might be better because it's expensive.