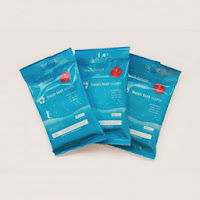 While we were in Vegas, we walked a LOT, so I had a chance to try out two products I had been wanting to check out for a while.

I've not been shy about saying how much I love Birchbox, check out the tag here to see all the good things I have to say. My best friend also is a subscriber, and her first box came with a product I've been wanting to try myself so I was a bit jealous. Then I was placing an order and just threw a few packs of Jasmine Seven's Fresh Feet Wipes into my cart on a whim.

This was a couple months ago, right at the end of sandal season. When I lamented on twitter that I bought them just in time to not need them, the company tweeted back:

Awesome @OneGirlsReviews! I bet you will find a use form the wearing boots in the winter too :)

How right they were, thought it wasn't boots that were the kicker for me, it was tromping around a big city every day for a week! The first day was really a killer, because I wasn't used to the walking and my feet just ached, so I popped out these wipes and it was fantastic. The scent is nice, so it definitely made me feel a bit better about what my feet might smell like, but it also left them feeling clean, fresh, and more relaxed. It was just a nice breather for my tired feet as soon as I took my shoes off. Which was especially good on two particular occasions.

There were two events we went to where I wanted to wear nice shoes. But my nice shoes aren't the easiest for walking around in, my best friend and I opted to pick up some of those Dr. Scholl's Fast Flats that they advertise on TV all the time. We figured we would wear those to walk around, then put on our nice shoes when we got to our destination.

In theory, this plan worked fine. It worked much better than actually wearing my dress shoes would have, to be sure. And you can't beat how absolutely tiny these are when you stash them in your bag after you get where you're going. I actually ended up wearing them down to the pool and the spa as well, because it was just so much easier than my sneakers and I hadn't packed any sandals (a mistake, of course).

There's a couple problems though. For one, there's the problem I've always had with their commercials. They show a woman dancing and getting tired of her heels, but hey, she's got this pair of flats folded up in a cute little clutch! It's like magic! Okay, but then where do her heels go when she changes? I was already carrying a pretty large purse with me the two days we dressed up, so it wasn't a big deal, but it's kind of annoying to have to throw your shoes in with all your other stuff, and it made it really hard for me to find things when I needed to fish out say, a monorail farecard.

The other issue is that because these flats fold up so easily to fit into a clutch, they're only barely better than going barefoot. Now, I do walk around barefoot a lot more than the average person, so that's not always a problem for me. But on the hard concrete of the Strip, it really hurt. Not to mention having to watch really hard for broken glass and other hazards because it would have sliced right through these like tissue paper.

I get it, you might be saying "that's not really what these are for..." And you're probably right. For running down to the pool or the spa where I just wanted something on my feet so they wouldn't get dirty walking through the hotel, they weren't bad. Maybe at a club where I'm not really going outside it wouldn't be too bad, though I'd think I'd worry about getting my feet stepped on by other people dancing.

In the end, because it was Vegas, we paid $15 for one pair and then $20 for another, and I've got $4 sandals from Wal-Mart that do the same job with more comfort, and probably protect the sole of your foot more. Their only advantage is that they fold up into a small space to carry them around, and well, if I have to have the space to carry my other shoes once I change into these, I already have the space for cheap sandals too. Overall, I'm not upset that I bought them and I think I got my money's worth, I'm not going to throw them out. But I think you should really know what you're getting, and they're not as good as they pretend to be.

But I do have to say, after wearing these and feeling a bit like I was walking barefoot down the street in Vegas, those Fresh Feet Wipes were really, really wonderful.
Posted by Elizabeth at 12:00 PM