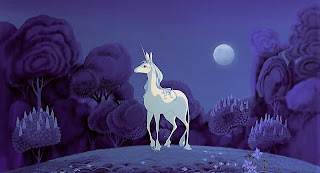 Last week on August 12th I was lucky enough to attend one of the screenings of the amazing new Last Unicorn Screening Tour. When they announced the tour last year, I was hoping that they would bring it to D.C. since most events like this come my way eventually. And they didn't disappoint, one of their first stops was The AFI Silver Theatre in Silver Spring, Maryland.

The tour is really fantastic for people who are fans of the movie, and I would suggest to anyone who is a fan of fantasy or animation as well. Or even 1980's movies, since it was shown as part of a retro 80's lineup at AFI. They're actually showing a brand new digital print of the film, so it's clearer and more gorgeous than has been seen on screens since 1982 when it premiered. I actually asked my mom and she told me that we didn't go see it in the theater when it came out, so this was my first time seeing it on the big screen. It was very beautiful, and like all good films there are a lot of things that you'll probably discover that you'd never noticed before.

The best part though is that the author, Peter S. Beagle, was there to do a Q&A session after the show as well as sign items and meet fans both before and after the film. I've actually met Beagle before, several years ago at Dragoncon in Atlanta, Georgia. I bought a new copy of his first book, A Fine and Private Place, and spoke to him for a while about why I loved it and how it reminded me of some very specific good memories. Meeting him was one of my favorite experiences at that convention, because he really took the time to talk and came across as a very genuine and charming person. But I had been under the assumption that I had been lucky to come to his table when there wasn't a line, and that's why I got the personal attention.

I learned last week that this wasn't the case, it's actually that Beagle is always wonderful to his fans. He will take the time to talk to you, learn a bit about you, tell you a story, and make you feel like the most important person in the entire line. This time we talked about screenwriting, and he gave me the best piece of advice about the film industry I've ever heard: "Just be patient. If you're patient, you'll outlive the bastards." It's my new motto. 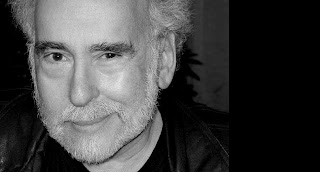 Photo from lastunicorntour.com
The Q&A was also wonderful, he spoke about several other books he had written and his experiences throughout the years as an author. I hadn't realized how many different types of writing he had done, or how often his works have been adapted to other formats. I really enjoyed him telling a story about why he wrote "Come Lady Death." Apparently, he was in a writing workshop with someone who hated fantasy in all it's forms. When another woman wrote a fantasy story, this other member of the group ripped into it simply because of it's genre. So Beagle went home and wrote the best fantasy story that he could to submit for the next week. He said that the other gentleman grumpily told him it was a well written story, but that he hated it anyway. "He also taught me that I could write a story in a day and a half if I was angry enough."

I've had some similar experiences in writing workshops, so I definitely appreciated the sentiment.

There was also a raffle and giveaways of I think five or six items, mostly copies of Beagle's books. I didn't win anything but I was okay with that because the bulk of what was given away I already owned (and I had several in my bag at that very moment to get signed later).

The tour is going to be in Southern California next, and some of the shows are sold out but you can still get tickets to a few at the tour's website. I spoke briefly with Connor Cochran of Conlan Press and he said that they hope to return to many of the cities where they've brought the tour because often people have found out about the screenings too late to get tickets, and they've been sold out in quite a few cities. So keep your eyes peeled, they may come to your city and if you missed it they might come back and give you a second chance. It's well worth it. Just make sure you give yourself plenty of time for the autograph line, so that everybody gets their one on one time (including you!)
Posted by Elizabeth at 6:02 PM