My review of my July box!

At first I was thinking I would just write about my first Birchbox but I've got so many things to say I thought I would make it a regular feature! I always forget to take a picture of the box itself, though I suppose the box never changes. But I want to talk about how much I love the great boxes this comes in, they're high quality and I'm already repurposing mine. 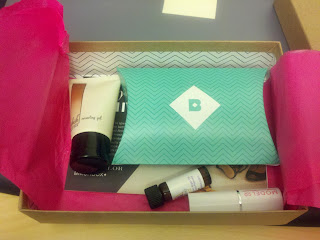 But this is the box without the lid, to give you an idea of the presentation. It feels like a present every month, and it's all carefully wrapped. 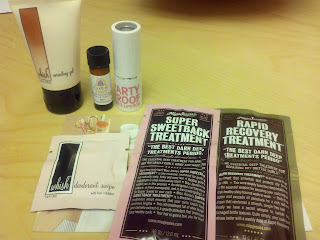 This is what I got in my August box. Another month and again I'm very happy with everything I got. Well, perhaps I wasn't in love with the Violet Oasis 100% Organic Argan Oil, mostly because my skin is already a bit difficult to work with so I'm not really thinking I'll start applying oil to it anytime soon. It might be good for hair.

Speaking of hair, I got two samples of Miss Jessie's products designed for curly hair. Now, I din't have curly hair it's really more of a wavy texture, and even that is not really that pronounced. But I get all the frizz and problems of curly hair without the prettiness of it, so I was excited to try them.

First, I tried the Rapid Recovery Treatment. Now, I'm completely beauty stupid so sometimes even what normal people would think are clear directions confuse me. The directions on this sample said to apply it to damp hair, and then rinse it out after a half hour. I assumed this meant not to actually wash it out. I'm still not entirely sure if that was the right decision, but basically it went rather poorly.

The day after I used it, my hair may not have been frizzy but it was weight down and looked oily and just generally gross like I hadn't washed it. I wasn't thrilled but I think it may have been user error. So a few weeks later I tried the Super Sweetback Treatment and this time I actually washed out the treatment when I was done. First, I have to say that the Super Sweetback Treatment smelled HEAVENLY. I have no idea what was making it smell so good but it was fabulous. And my hair retained the scent for a while and I loved it.

It also did look nicer the next day, less frizzy, a little more normal. But there were two things that are keeping me from buying this one- first, I don't think it was really a miracle worker like they described and I might get the same results from any decent conditioner (perhaps it takes multiple applications to really work) but the other thing is the price. If I can find a cheaper alternative, then I don't really have the money to spend on this kind of thing. I wish I could find something that smelled this wonderful though!

My favorite thing this month was the Whish Deodorant Swipes. I'd never used a deodorant wipe before, and I found the idea intriguing. I was really pleased with it, I liked the scent and the feel of it and the deodorant definitely worked for me. I would have already bought a pack of these if Birchbox actually listed the quantity you receive on their webpage (unless it's $22 for a single wipe, in which case absolutely not!) and I don't know how much I'm willing to spend on them. They also supposedly inhibit hair growth, and I couldn't tell you how well that works since I only had one but if it does, then that's definitely worth a bit more cash.

The only other product that I've got any feedback for is the ModelCo Party Proof Lipstick. My sister wanted to try this one, so I decided to be nice and let her have it. The one in my box was a great neutral shade called "Kitty," and she reported that the shade was really lovely but while the color on your lips might not fade, it did rub off on her coffee mug. I'm still thinking I'd love to get the Neutral Collection sometime soon but I'll have to be quite careful not to leave lipstick stains everywhere. 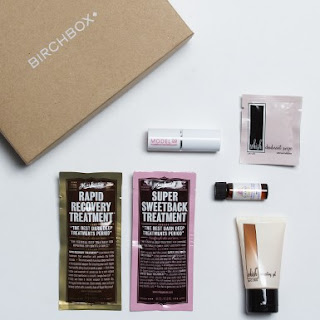 Photo from my Birchbox account page
Overall, another really successful box! I definitely have a few more things added to my favorites list on the site, just waiting for me to build up some more points before I buy them. As a lucky bonus, I also got to see the samples that my best friend got in her first Birchbox this month, and they were completely different from mine! I'm jealous of a couple of them, and hoping I get them in a future box. If not, I'll just wait until she tells me if they're good and buy some of my own.

My next box will arrive in a couple weeks, but it takes time to try out the products so expect another review in about a month! If you think this looks fun to get a new box of samples every month, then you should definitely Subscribe! I highly recommend it!
Posted by Elizabeth at 8:22 PM