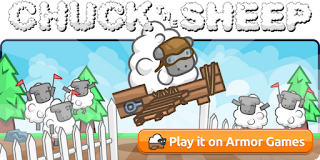 I haven't really watched any tv shows this week that I haven't reviewed and I'm behind on my schedule so I'm going to give you something different: a flash game review!

I'm a big fan of casual games and simple games that you can waste a bit of time playing in between projects. Or while you should be doing projects, but we'll pretend that doesn't happen.

I happened across Chuck The Sheep a few days ago, and I sat and played for two hours when I was just going to check it out for a few minutes and bookmark it if I liked it. It's got everything I'd want in a casual game, and I've definitely been going back to it since the first day which is pretty rare for me.

The basic premise is that Chuck The Sheep doesn't want to lose his wool, so he decides to make a break for it in a homemade airplane. It's a pretty simple game that uses launch mechanics and only a few keys to play. You try to get a good launch by hitting space at the right time as a dial spins, you hit the up and down buttons to (kind of) steer. Shift gives you a boost, and space gives you extra shields if you've upgraded. Collecting resources means you can upgrade your ship and get further on the map with each launch.

I actually didn't realize at first that there is a physical goal (even though there's a progress bar at the bottom of the screen, I somehow missed it) so you actually can finish and win the game. But even after you get to the end, you can keep playing to finish your upgrades, level up, and complete more quests. The quests are fun and silly, and even the more difficult ones aren't impossible. Like I said, I finished the game in a few hours but it's enjoyable enough to have continual replay value so it has the best of both worlds for me. I hate games that don't actually end.

The graphics are great, they're adorable and fun. The game doesn't take a long time to load and I haven't found any glitches with it. The keyboard shortcuts make sense and are easy for you to keep your hand in one place and not be reaching randomly for the key you need. All in all, it's absolutely a game you should play through at least once if you like flash games at all, if only just for the adorable graphics.
Posted by Elizabeth at 4:27 PM